As night falls, Baili Chang'an Street becomes a beautiful stage, and 3,290 ex-actors each hold a light and shadow screen, which together constitute the “Great Wall of the Dragonfly”, the “floating kite”, the “Peace of the Peace”, the “Floating Five-Star Red Flag” and so on. The amazing theme of the huge picture shows the great leap of the Chinese nation from standing up, getting rich and strengthening. The BOE's collapsible “handheld light and shadow screen” IoT display system solution using the XiXun technology control card throughout the audience, showing the unique charm of LED display technology to the world!

So how is this stunning visual effect achieved?

The creative team proposed the creative picture of “Peace Dove”. The North Polytechnic team first used the computer to simulate the picture, put it into a two-dimensional scene, disassemble and refine it into 3290 modules (each module represents a light screen). Below each light screen is a Xixun Android control card E16, a content storage device and a player, which are used to wirelessly excite the images in the memory. After that, the key frames and time points of each module were determined according to the trajectory of the dove of peace, and 3,290 actors were trained to develop training manuals such as formation changes and performance passwords. The actor only needs to hold the light screen to operate correctly, without any operation on the screen. In the end, 3290 light and shadow screens together form a huge light and shadow pattern.

Equipped with the world's leading Asyn Asynchronous Android card E16 and AIPS signaling system, the first time to quickly deliver 133,800 frames of content to 3290 screens in a short time, using wireless LORA technology to perform unified video switching on 3290 screens, thus ensuring the picture The integrity, as well as coordination with live music and lighting.

The original director's group designed 4 programs, 8 minutes of performances, and finally changed to 90 minutes throughout the audience. This is also proposed to quickly send tens of thousands of large video materials to the control card in a short time via wireless 4G. An unprecedented level of difficulty. At the same time, it is necessary to realize more and more complicated shifts of more than 3,000 screens, and to ensure the overall restoration of video, and to achieve millisecond-level synchronization of video wireless control, which is undoubtedly a major test for current LED display technology.

In order to overcome the difficulties, Xixun Technology established a “tapping team” under the guidance of R&D director Yang Zuodong, stationed in Beijing, and strictly controlled each card, and through experts with Unicom operators, professor of material design at Beijing Institute of Technology, LED Display panel technical experts, wireless LORA module experts repeatedly communicated, day and night to discuss and debug products, overcome difficult problems at critical moments, together with an unprecedented visual feast for the 1.4 billion Chinese people. Every component on the LED display is independently researched and developed by Chinese enterprises, which fully reflects the development of China's LED display technology and is gradually approaching the world's advanced level.

The perfect presentation of the National Day party, in addition to the first-class high-tech, there are many unknown heroes, quietly paying for this feast. 3,290 people, 87 days of closed training, 120 people support 7*24 hours of all-weather service, more than 4,000 sets of handheld light and shadow screen equipment... Everyone is using their actual actions to describe their love for the motherland, just because With your dedication, you can create this perfect festival. I am very grateful to the BOE and Alida display manufacturers for their perfect cooperation with Xixun Technology. Countless days and nights, we fight side by side, and finally turn the beautiful ideas into perfect reality. During the period, we can't withstand the pressure and the problems we suffer. Imagine that Xixun Technology pays tribute to every hard-working staff and pays tribute to our great motherland! 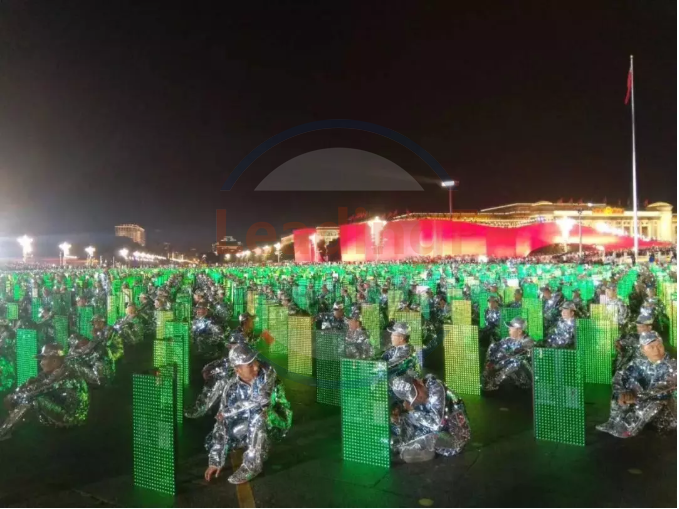 Finally, I would like to express my special thanks to the leaders of the National Day Lianhua Activities Headquarters, the experts and teachers, the director team, the Black Bow team, the North Polytechnic team, and the BOE team, so that technology and art can once again achieve a perfect integration, and a beautiful beauty for the 70th birthday of the motherland. The beautiful, wonderful and world-class celebrations have once again witnessed the Chinese miracle!